It started with an annual blood work two years ago. I was called by the clinic to see if I had been taking iron pills. I said I hadn’t but have  done so in the past due to anemia. She said the Dr needed to talk to me. Now, you know, when you hear that, all sorts of things go thru your mind!!! My family has had it’s fair share of cancer,heart, kidney and diabetes troubles.

I found out my iron was higher than normal. In the past it was borderline low and anemic when I was younger. So she scheduled  more blood work a month later. It was high too. A month after that blood work was done again and  was sent to Toronto to the Genetics lab, to determine if I had hereditary hemochromatosis.

Or as some people call  it; the “Celtic Curse”. It took 12 weeks for the results to come back that I did have Hereditary Hemochromatosis. We caught it early she said and all you need to do is donate blood. Seemed easy enough.

I bought this book online and it has been quite an eye opener and I highly recommend it. 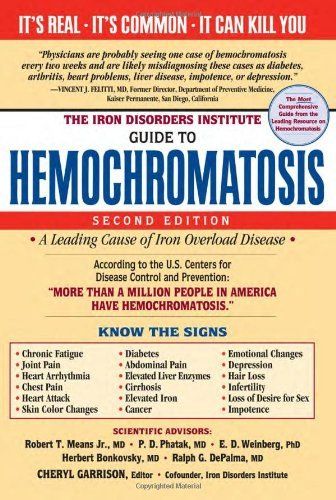 I often wonder if my mom who had so many issues on this list  and eventually passed on from pancreatic cancer had this. We will never know.

Hemochromatosis is more common they say among European descent (especially Irish) but it can happen to all ethnicities. It was very interesting to learn more about my family history. My cousin is into genealogy and created an amazing family tree book and it was so fascinating!Part of the genetics testing is looking into your family tree . I knew my grandpa was Mennonite and my grandma Irish, but I also learned my Dad’s side was English and Irish.

I highly recommend anyone  to ask their Dr at their annual physical to run a FULL Iron panel! Not just an iron test. I honestly believe that this should be a mandatory test! Yes, it costs more for the extra labwork to be done, but that is no where near what the health consequences could cost!

Blood tests — Three blood tests that are usually recommended to determine iron levels in the body.

●Iron levels — Most people with hemochromatosis have elevated levels of iron in the blood.

●Ferritin levels — Ferritin is a protein that reflects the body’s stores of iron. Blood ferritin levels increase when the body’s iron stores increase; however, levels of ferritin usually do not rise until iron stores are high. Therefore, the results of this test may be normal early in the course of hemochromatosis.

Donate blood if you can!

If you are interested in learning more, here are a couple more sites to check out or send me a message 🙂

Canadian  – Too Much Iron

You can find out more about which cookies we are using or switch them off in settings.

This website uses cookies so that we can provide you with the best user experience possible. Cookie information is stored in your browser and performs functions such as recognising you when you return to our website and helping our team to understand which sections of the website you find most interesting and useful.

Strictly Necessary Cookie should be enabled at all times so that we can save your preferences for cookie settings.

If you disable this cookie, we will not be able to save your preferences. This means that every time you visit this website you will need to enable or disable cookies again.